How Canada is adopting fintech

Canada has one of the lowest rates of fintech adoption in the world, even though the number of fintech companies in the country is on the rise.

There are at least 1,000 fintech companies operating in Canada as of November, 2019, according to CPA Canada, up from approximately 600 in 2018 as stated by a CFA Montreal report.

Fintech adoption is growing among consumers

EY says the jump in global fintech adoption since 2015 can be attributed to incumbents such as banks, insurers, stockbrokers, and other financial institutions entering the market and offering their services online. The most commonly used category of fintech globally is money transfer and payments (75 per cent of respondents in the EY survey reported using one or more fintech services in the category), followed by savings and investments (48 per cent), budgeting and financial planning (34 per cent), then insurance (29 per cent) and borrowing (27 per cent). 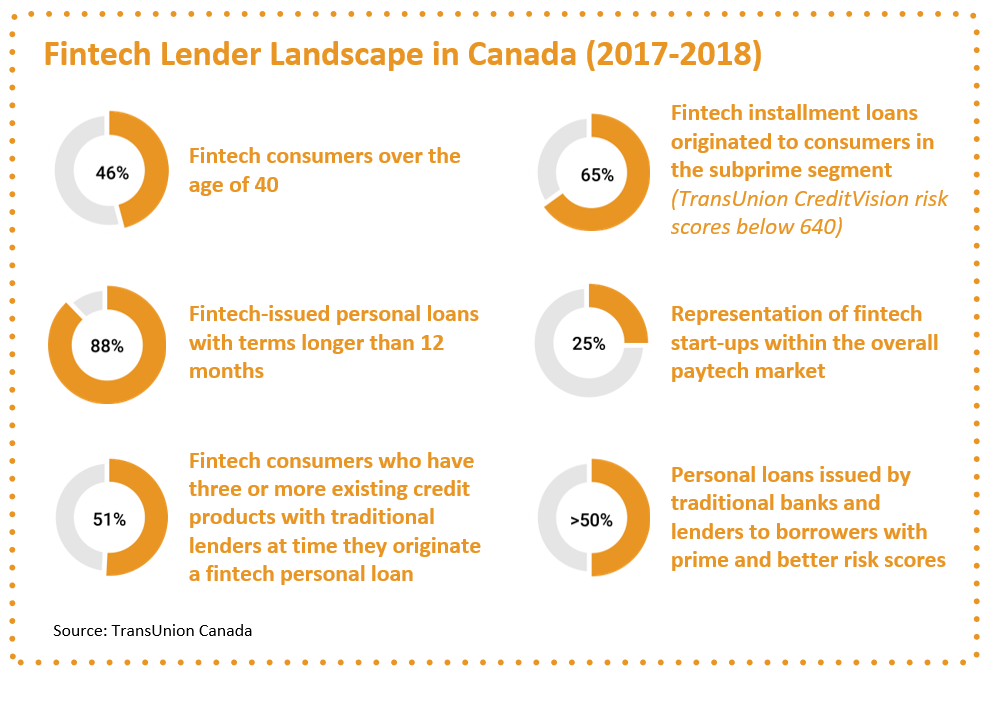 The Canadian fintech industry is relatively new compared to the U.S. industry, but it is growing. According to a TransUnion Canada study, in order to analyze the trends in the fintech lender landscape, one must debunk myths about the services, how they operate, and who is taking advantage of them.

Firstly, almost half (46 per cent) of consumers of fintech lending are over the age of 40, compared to 53 per cent for consumers with traditional bank-issued personal loans. This indicates that GenXers are using fintech services as much as younger generations, challenging the belief that only older consumers use traditional lenders.

Furthermore, approximately 88 per cent of fintech-issued personal loans have a term longer than 12 months, versus 66 per cent for bank-issued personal loans. Contrary to the perception that fintechs primarily focus on offering short-term loans, this figure suggests fintechs are more willing to embrace risk with associated higher delinquency rates than traditional lenders.

Moreover, more than half (51 per cent) of fintech consumers have three or more existing credit products with traditional lenders at the time they originate a fintech personal loan. This indicates fintechs cater to all types of Canadian consumers, not just the ‘underbanked’ as is sometimes perceived.

However, fintechs have higher delinquency rates across risk tiers than traditional lenders, and therefore charge interest rates ranging from 20-30 per cent in the subprime segment.

Fintech strives to make financial services more accessible for consumers and businesses. As the Canadian industry evolves, access to capital, regulatory changes, and technological advancement all play key roles in the competitiveness of the space in Canada, according to TransUnion.

International scaling and expansion, along with developments in blockchain and AI, may spur the creation of new fintech services. EY states that Fintech’s maturation in Canada is also dependent upon the evolution of consumer priorities, such as ease of opening an account, attractive fees or prices, or data security concerns.

Global Advantage Consulting offers a variety of services customized to your organization’s needs, with top-notch consultants experienced in policy, disruptive technologies, defence and other innovative sectors, in combination with a high-caliber team of research analysts and graphic design talent.