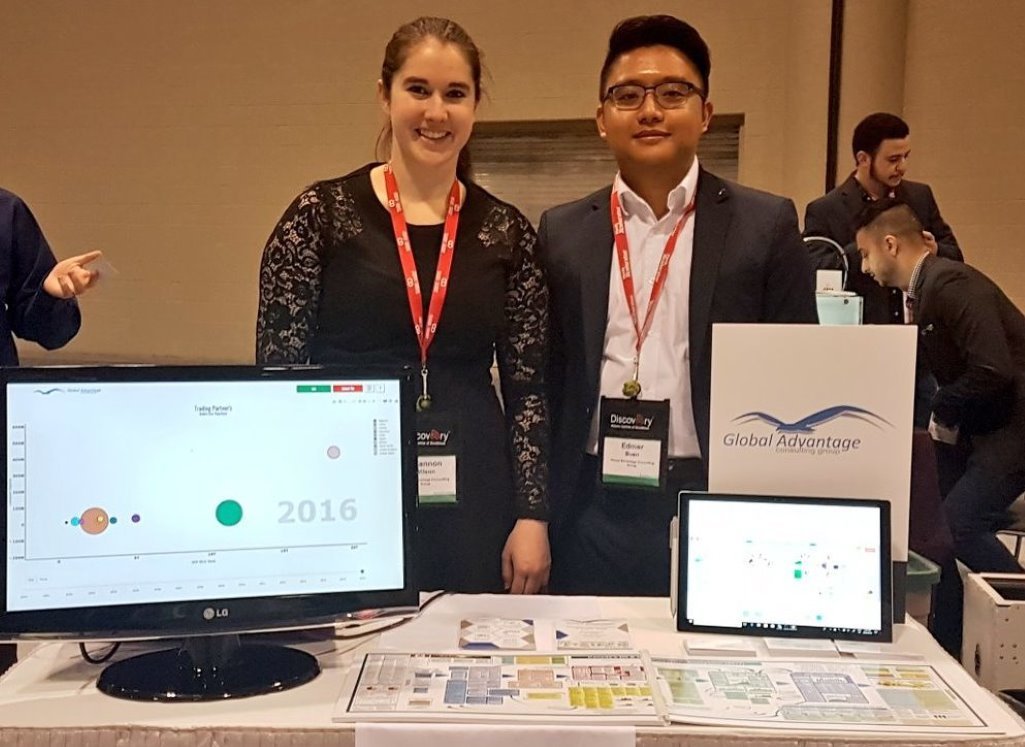 From April 30th to May 1st, Global Advantage attended the OCE Discovery conference held at the Metro Convention Centre in Toronto. Shannon and Edmer were invited by Algonquin College to showcase our ecosystem maps and data visualization tool, Dancing Data. Dancing Data has been developed in partnership with Algonquin’s Data Analytics Centre, and we are continuing to work with the college in pursuing further technology development.

The Ontario Centre of Excellence Discovery is held every year in the Toronto Core with over 3800 attendees Discovery and is known as Canada’s leading innovation-to-commercialization conference. There were many notable exhibitors and keynote panels throughout the conference, including discussions on Artificial Intelligence, Smart Cities, Next Generation Manufacturing and Climate Change. Our team was also able to meet Sophia, the most advanced Humanoid Robot in the world.

Artificial Intelligence was the big talk of the conference. One panel discussed how 85% of companies believe that AI would be useful to their companies but only 20% of companies have actually implemented it. Other interesting factors were discussed such as trust in AI, and how to start working with AI. In suggesting how companies could begin using AI Megan Anderson, Director of Business Development at Integrate.ai, listed three key steps:

The AI community also spoke to how it not only needs data scientists and engineers but also Research Experts, Sales Experts and the Government to help in order to further develop AI and set a standard for ethics and policy for AI in Canada

After attending and learning so much about Canada’s rising AI community it has inspired our team to look further into working with AI and integrate it into our digital map and dancing data tool in the foreseeable future. Overall, OCE Discovery was an extremely informative and innovative event and our team couldn’t be more delighted to have attended.