Canada well-positioned as a world leader in quantum technologies

Canada is well positioned as a world leader in quantum commitments, with high volumes of patent applications, scientific publications and overall investments.

The second quantum revolution (Quantum 2.0) has arrived where many-body quantum superposition, entanglement and measurement are actively employed to alter the quantum face of the physical world.

Over the last decade, quantum technologies have attracted the world’s leading countries to make outsized financial commitments to support ambitious national strategies and programs.  Former US President Trump signed a $1.2 billion five-year US National Quantum Initiative in December 2018. The European Commission has a ten-year €1 billion Quantum Flagship initiative in place. Germany, which benefits from the European Flagship program, committed €1 billion in developing quantum technologies but has since added €2 billion to its quantum efforts as part of its Covid-19 recovery plan. The UK’s ten-year National Quantum Technologies Program, now at its mid-point, involves commitments of over £1 billion through a mix of government and industry funding.

China is markedly increasing its funding from a publicly disclosed $US 1 billion from 2006 to 2019. Construction of a National Laboratory for Quantum Information Science in Hefei in Anhui province at an estimated cost of $US 10 billion was announced. Indications are that the next five-year plan to be announced in March 2021 will include increased levels of funding. China now ranks first globally in numbers of publications, has demonstrated the most advanced Quantum Key Distribution project using space and in December 2020 claimed a leading position in quantum computing research based on a test of a prototype quantum computer using photons. 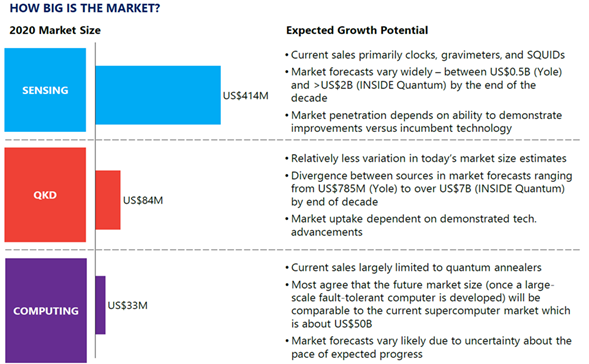 For Canada, NRC has cited forecasts developed by third-party economists projected that by 2030 Canada will grow an $8.2 billion quantum technology industry, employing 16,000 people and generating $3.5 billion in returns for the government.

The emergence of market-oriented products and the growing – though generally still early-stage – commercial traction and success with quantum technologies are increasingly evident. Many are still at an early stage in terms of the product’s or service’s marketability and the still-limited breadth of market acceptance.

Investments in startups and venture funding have been growing over the past five or so years, indicating that early higher risk investors anticipate being able to monetize gains within five to seven years. An analysis published in Nature indicated that in 2017 and 2018, companies pursuing quantum technologies received four times as much private investment as compared to the previous two years. Canada’s D-Wave Systems, which has sold computers that exploit quantum annealing effects, especially to tackle optimization problems, was the single largest beneficiary globally, raising $US 177 million by the end of 2018, also the lion’s share of Canada’s total of $US 243 million.