While most other countries are either just announcing a quantum technologies strategy or have yet to develop a comprehensive national plan altogether, the UK has recently (2020) entered “phase two” of its top-down National Quantum Technologies Program. Announced through an original £270 million government investment back in 2013, today the NQTP represents a 10-year (2014-2024), £1 billion-plus public-private investment geared towards accelerating the commercialization of quantum technologies.  The NQTP’s primary objectives include:

To these ends, the National Program adopted an integrated partnership approach as it brought together the various government stakeholders, representing a coordinated effort between the Department for Business, Energy and Industrial Strategy (BEIS), the Engineering and Physical Sciences Research Council (EPSRC), Innovate UK, and the National Physical Laboratory (NPL), in partnership with the Defence Science and Technology Laboratory (DSTL) and the Government Communications Headquarters (GCHQ).

By acting as a collaboration mechanism to facilitate industry involvement with academic research, the Program itself focuses not on quantum science, but on the exploitation of that science for technological benefit and commercialization by leveraging the UK’s academic excellence in quantum research to spur early-stage technological developments. As such, industry representatives and individuals from the BEIS, EPSRC, NPL, GCHQ and DSTL comprise the NQTP’s governance structure, including the Program Board, Strategic Advisory Board (QT SAB) and Quantum Technology Delivery Group (see Figure 1). 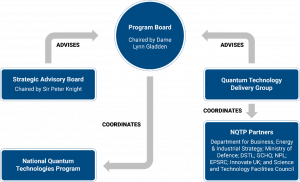 The Program supports simultaneous investment in applied research, innovation, skills and technology demonstrations to help UK industry commercialize new quantum-enabled technologies. Through the NQTP the UK hopes to secure its “competitive advantage as a global supplier of quantum devices, components, systems and expertise while continuing to play a leading role in engaging globally in the development of quantum technologies.”

The NQTP framework concerns itself with a sizable portion of the UK’s training and skills, research and industrial collaboration activities for quantum-enabled technological developments. The primary nodes within the NQTP are four university-led Quantum Technology Hubs (QT Hub), which were envisioned to function along a multi-institutional, challenge-led line with focused research programs designed to fast-track quantum technological developments. In October 2014, EPSRC announced the following four QT Hubs, which would receive a share of the initial £124 million EPSRC investment:

Detailed below in Figure 2 is a breakdown of the four QT Hubs and their associated academic partners. 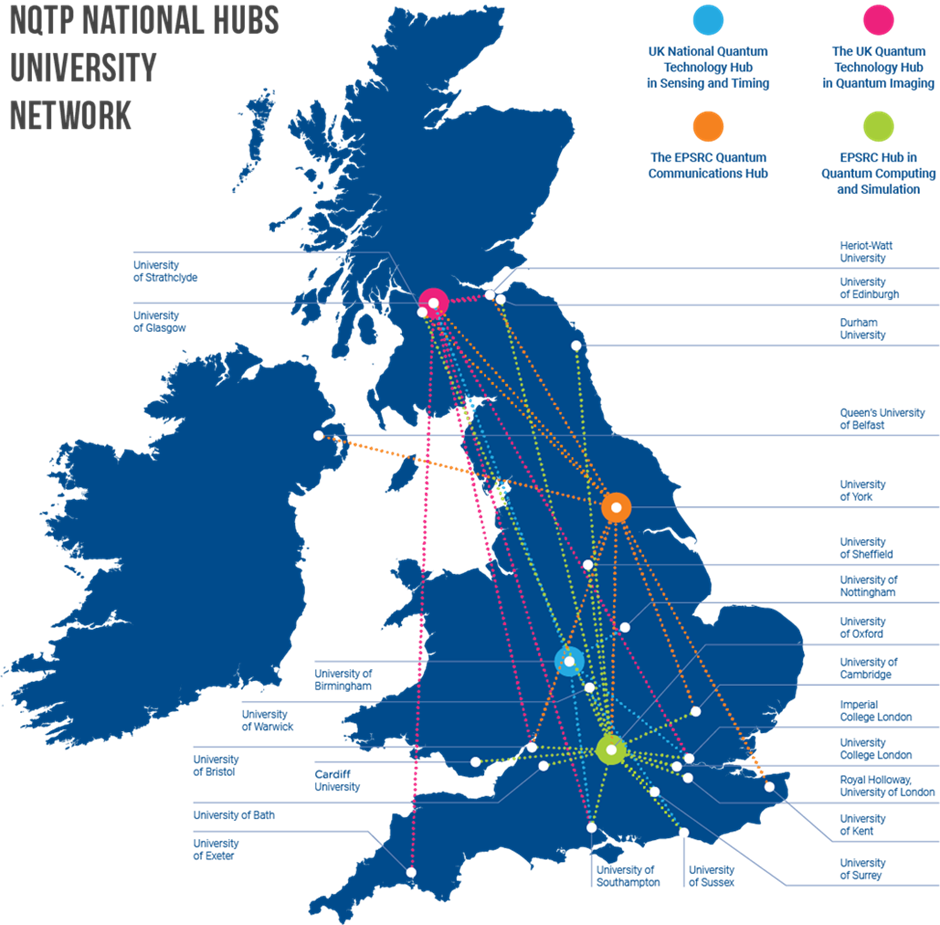 The bulk of the UK’s quantum technology effort is based on this hub-and-spoke model, designed to accelerate the industrial development of quantum technology. The QT Hubs provide an easy entry point for companies interested in unlocking the potential of emerging quantum technology markets. Concurrently, through co-creation and co-location spaces, the QT Hubs support quantum spinouts and startups, providing expertise and facilities for early-stage prototype developments. To date, the program has facilitated 25 spinouts and supports more than 10 startups.

Operating alongside the four Quantum Technology Hubs are three Training and Skills Hubs in Quantum Systems Engineering, whose purpose is to deliver skills training in a co-working environment providing exposure to quantum research excellence and industry applications of quantum science. The three Training and Skills Hubs received an initial £11.6 million in EPSRC funding during phase one.

Alongside the Training and Skills Hubs are a series of university based EPSRC Centres for Doctoral Training (CDT) in Quantum Engineering. In 2013, the Engineering and Physical Sciences Research Council invested over £350 million to create 70 new Centres for Doctoral Training, with three awards being made that support doctoral training within the field of quantum technologies.

The Centres for Doctoral Training are designed in collaboration with leading academic and industry experts to expose participants both to the theoretical understanding and practical applications of quantum physics. To date, 150 students have been trained through the quantum CDTs.