Education Across the OECD

Governments are increasingly relying on international comparisons of educational opportunities and outcomes when formulating policies to improve social and economic prospects, enhance school performance and mobilize resources to meet growing economic and social needs. Talent and skills development are becoming an increasingly important and competitive field as advanced economies compete to attract and retain the highly qualified personnel.

Under this backdrop, the latest edition of the Organization for Economic Cooperation and Development’s (OECD) Education at a Glance 2022 was released on October 3rd, 2022. The report looks at the state of education worldwide including indicators such as access to education, resources and funding, educational attainment, and more.

Canadian Education at a Glance

Canada generally fares quite well compared to the OECD average on most indicators. The country has one of the highest tertiary education attainment rates (ranked second only to Korea), with 66.4% of 25-34-year-olds having completed some form of post-secondary education. This is above the OECD average of 47%. Moreover, Canada has achieved near-universal upper-secondary attainment among young people. Only 5% have not received at least a complete high school education. 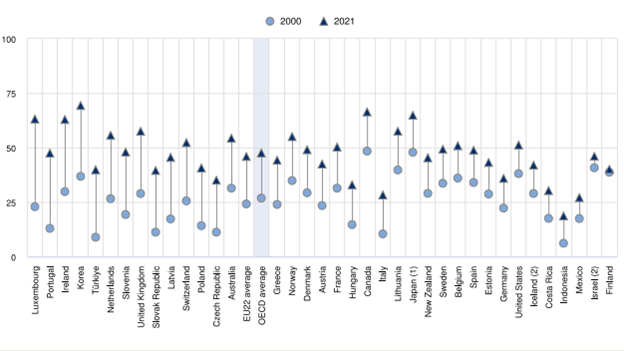 Despite its relatively high ranking across various OECD indicators, there are some areas where Canada could improve, however. Importantly, in 60 % of the countries for which data are available, the average amount of grants and scholarships that students receive for higher education exceeds the average tuition charged by public institutions. In these countries, grants and scholarships are generous and cover the cost of living for students. However, the amount received in Canada is insufficient to cover the annual tuition for graduate school, covering 40-65% of the average annual fee.

In the transition from education to the workplace, Canada has a positive correlation between the level of education and the share of employment. However, while Canada has succeeded in increasing the number of science and engineering PhD graduates, but it has not made the enough progress to ensure that advanced research talent such as PhDs are absorbed by the private sector. Based off data from the Canadian Council of Academies (CCA), less than a third of PhD graduates actually end up in the private sector, which is problematic considering the number one obstacle facing firm-level innovation in Canada is lack of skills (depicted in Figure 2 below).

In part, what is limiting industries uptake of PhDs is how universities continue to prepare PhD students for careers within the academic system. CCA found that many PhD graduates do not know how their skillsets and knowledgebase translate to the private sector and have difficulty identifying employment opportunities.

Canada needs to simultaneously promote industry-focused curriculum and skills development for its advanced research talent and increase the receptor capacity of businesses to absorb and utilize the skillsets of these individuals.

Budget 2022 Implication for Science and Innovation for Third-Party Organizations