How Canada can escape mediocrity through the intangible shift

“Canadian firms have been as innovative as they have needed to be.” This statement from a 2013 Council of Canadian Academies (CCA) report holds true 8 years later. Even with one of the most educated workforces in the world, Canada consistently fails to lead in innovation.

Rich with natural resources, Canada has maintained a comfortable position within the global economy by leveraging its comparative advantages. But as countries embrace the rapidly growing intangible economy, they become more competitive, and Canada’s advantages gradually become inadequate.

Intangibles appear to pose a challenge, more than anything, to Canada. The thought of a significant economic shift is concerning for a country that, for years, has been satisfied with “good enough”. But the potential change in status quo is exactly what Canada needs to exit stagnation and enter the competition. So exactly why should Canadians be optimistic as the economy transitions from the physical to the abstract?

According to the National Bureau of Economic Research, the intangible economy can be divided into three components: 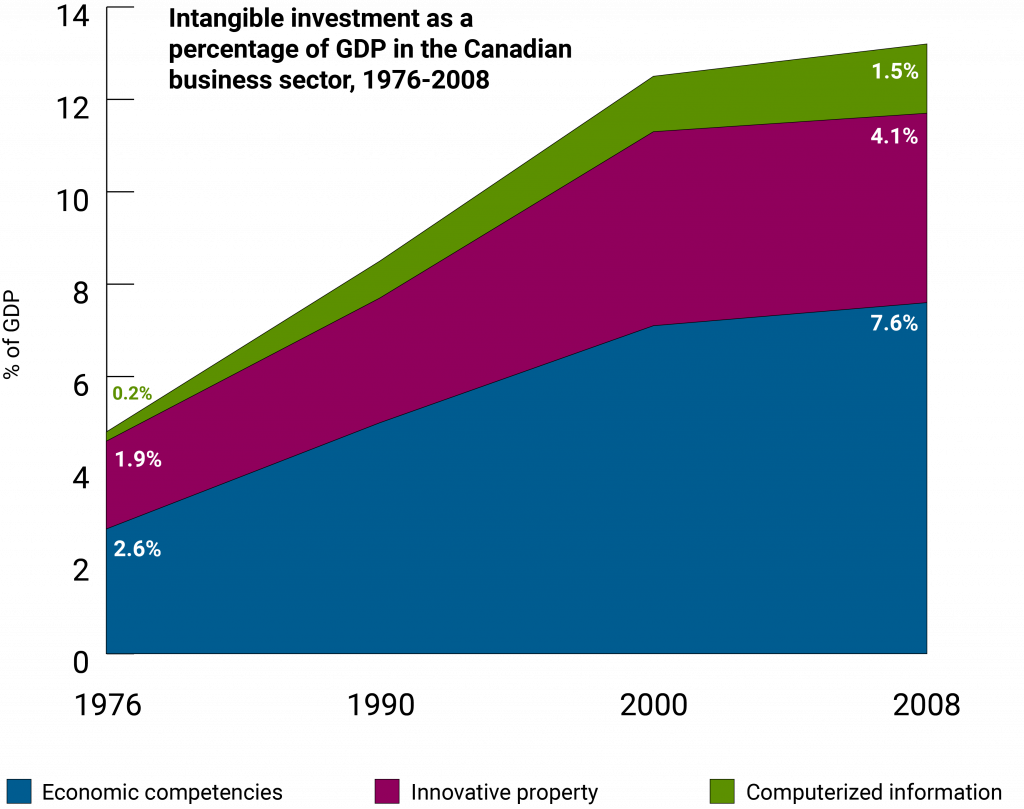 A Push for Data

Ironically, there was a major lack of ‘computerized information’ preventing our ability to evaluate the status of computerized information – or any of the three components of the intangible economy – in Canada. It is easy to say that investing in data will help Canadian firms and grow the intangible economy, but what is not so easy – and has yet to be accomplished – is obtaining and analyzing data on where Canadian firms currently stand, where they should be heading, and what can be done to help.

A recent effort has been made by Statistics Canada to estimate the value of data, databases, and data science, but without better measures for analyzing intangible investment in the country, it will be difficult to motivate the need to shift to intangibles. We must clarify the implications of this intangible shift before deciding on how to proceed and designing policy around it.

Despite having one of the world’s most skilled workforces, Canada’s R&D expenditure as percentage of GDP has been steadily decreasing. Canada has also largely failed to retain its intellectual property (IP), and ranks the lowest out of all G7 countries in IP products as a percentage of gross fixed capital formation.

There are four properties that distinguish intangible assets from tangible ones:

Canada will continue to suffer from the ‘spillovers’ effect until its innovation culture changes from “research and sell” to “develop and apply”. Innovative property can only retain its value if its benefits can be captured and protected by the innovating firm. This shift will move Canada up the global ladder of innovation and improve productivity.

There are also practical economic reasons for Canada to switch its focus from tangible to intangible assets. First, a study found that intangible investments in the U.S. and European Union (EU) endured and recovered from the 2008 recession more effectively than tangible investments. While comparable Canadian data is not available at this time (hence the importance of a push for data), diversifying its portfolio of goods and services will put Canada in a significantly better position to endure future economic downturns and volatility.

By expanding its presence in the intangible economy, Canada will benefit from productivity boosts that would otherwise remain untapped.

Bounded by scarcity, sectors primarily engaged in the production of tangible goods are burdened with economic considerations such as marginal cost/benefit and economies of scale. Businesses focused on intangible assets, however, face entirely different rules of production. Unlike machinery, a mobile application only needs to be created once before it can be distributed and sold on many platforms, countless number of times. This, theoretically, paves a path to virtually unlimited growth – an attribute all profit-maximizing firms seek. The fact that this unprecedented growth potential can be attained with minimal labour makes it even more feasible and appealing.

However, scalability does not come without challenges for the economy. The reduction in employment opportunities, and the race for first-mover advantage that it fosters “[…] raise questions about the distribution of opportunities to participate in and benefit from the innovation economy.” If these concerns can be regulated effectively, the scalable nature of intangible assets can improve quality of life at a pace unseen by tangible products.

A double-edged sword for Canada

Intangible assets pose a risk and an opportunity. If Canada elects to ignore the intangible transformation in the name of ‘prosperous stagnation’, the competition will take its cut of Canadian prosperity. If Canada recognizes the shift to intangibles and uses the opportunity to turn its weaknesses into strengths, the growth potential is massive.

Read more about how Global Advantage’s services can help you plan your organization’s way forward here.