Are the Staggering Number of Ministerial Mandate Letter Commitments Realizable? The Prime Minister’s Office released 38 new ministerial mandate letters on Dec. 16th, outlining the broad priorities and 645 specific total commitments that the ministers in the new Liberal government must strive towards accomplishing during this election cycle.

These letters are “not an exhaustive list of all files a minister would work on”, but the question arises, are there too many commitments for a national government to deliver?

Cabinet was sworn in Oct. 26 and the 44th parliament began Nov. 22. The letters were announced following a nearly 90-day delay in their release since the 2021 federal election.

Global Advantage Consulting Group (GACG) produced a detailed analysis of the MMLs and the 645 commitments stated therein. The ministers’ four broad priorities are: 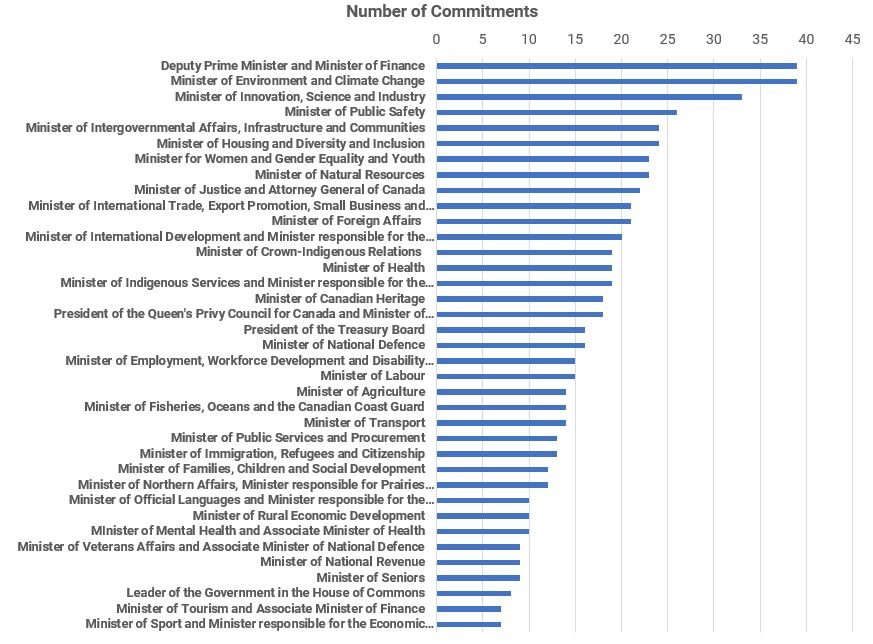 Prime Minister Justin Trudeau directed each minister to return to him with a plan for how they intend to accomplish each of the commitments given to them and is ordering his ministers to publicly report their progress.

GACG identified commitments outlining the launch of 18 new organizations or structures, such as:

The key issues present in the largest number of the MMLs are equity, diversity and inclusion (24 letters), climate change/cleantech (21 letters), and jobs, talent and skills (21 letters).

The Ministers of Finance (Chrystia Freeland), Public Safety (Marco Mendocino), Indigenous Services (Patty Hajdu) and Innovation/Science/Industry (François-Philippe Champagne) are responsible for the broadest range of topics of priority, with nine each.

According to GACG analysis, there are relatively few commitments specifically targeting businesses and economic development, while emphasizing improving quality of life for households and encouraging cross-departmental collaboration between Ministers.

Additionally, neither the Minister of Health’s nor Minister of Mental Health’s mandate letters contained any mention of the ongoing opioid crisis facing Canadians, despite an average of 19 people dying of an opioid-related overdose everyday in the first half of 2021, and this trend could worsen in 2022.

The staggering 645 commitments stated in these letters are too many for the federal government to realistically accomplish before the next election cycle, and likely unrealizable.

As noted in Michael Wernick’s book, Governing Canada: A Guide to the Tradecraft of Politics, Cabinet’s time is split between 100 hours per annum on a variety of topics. The majority of these commitments, new proposed agencies and centres, and 645 initiatives will require funding approvals, and in some cases, new legislation.

How is the already overburdened public service going to design and develop implementation plans for these 645 commitments, see them pass the legislative agenda, and launch them before the next election cycle?

In its Briefing Deck, Global Advantage presents some select priority commitments from some of the key ministers. Contact info@gaconsulting.ca to receive a copy of the Deck.

The Federal Government’s Economic and Fiscal Update 2021 announced new proposed budget items to extend the fight against COVID-19 and extend support to businesses and individuals.

Read our free Briefing Deck, “Canada’s Economic and Fiscal Update 2021: COVID-19 is Producing Debt and Inflation for All”, to find key takeaways from the update.

The Never-Ending Fight Against COVID-19